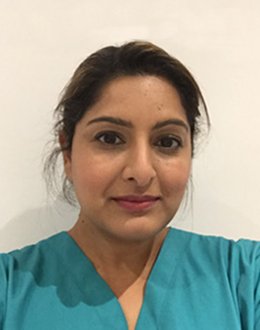 Shina qualified with Distinction from St. Bartholomew’s and the Royal London School of Medicine and Dentistry in 2001, in 2004, she gained her MFDS fellowship qualification from the Royal College of Surgeons of England.

She has worked as an Oral Surgeon at King’s College Hospital, London, since 2006 where she performs all aspects of dento-alveolar surgery both under intravenous sedation and local anaesthetic alone. She also teaches undergraduate students and trains the DF2 dentists and Specialist Registrars in Oral Surgery. Shina works as a Specialist Oral Surgeon in General and Private practice during the rest of the week. In 2009 she gained her MSurg Dent qualification from the Royal College of Surgeons of England.

More recently, in 2013, Shina gained a diploma in Conscious Sedation in Dentistry from Guys Hospital, further developing the interest she has in working with very anxious and dentally phobic patients. Her calm and gentle approach is much appreciated by patients and she has been providing Oral Surgery and general dentistry under sedation for the dentally phobic patients for over 10 years. She has an honest and caring approach, and strives to always provide the best treatment for those under her care.